Sipping tea in the Sahyadris – Travel Blog By Ram Sundaresan 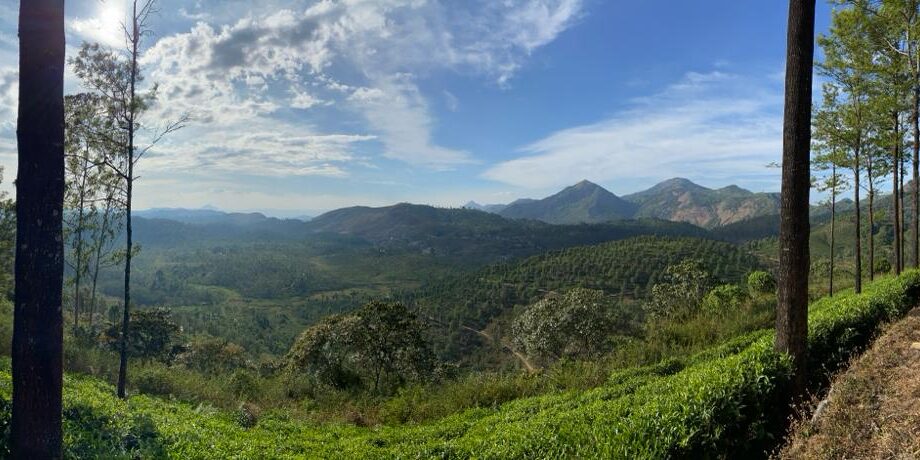 All of us were longing for a break, not having taken a vacation in nearly 2 years. A short 3 or 4 day holiday from Chennai, meant we had to pick a place that would be easy to reach and yet off the beaten track to provide an unique experience. Our daughter chose Valparai known for its tea estates.

Valparai is a small town in the Anamalai ranges around 100 kilometres or 3 hours by road from Coimbatore. The Anamalais or elephant hills is wedged between Tamil Nadu and Kerala at an altitude of 900 to 1600 m, and houses the Indira Gandhi National park and wildlife sanctuary. Anamalai is part of the rainforest of the Sahyadris or South Western ghats, spread over 3 states – Karnataka, Kerala, Tamil Nadu. This is one of the world’s 18 bio-diversity hotspots and is a species rich eco-region. This region is rainfed by both the southwest (June to September) as well as the North East (October – November) monsoons Tea plantations in South India are almost exclusively in the areas of the rainforest. The region comprises of 6 national parks (Bandipur, Eravikulam, Silent valley, Indira Gandhi, Mudumalai and Mukkurthi ), as well as 19 wildlife sanctuaries such as Nagarhole, Idukki Parambikulam, Periyar.

The Western ghats range from a series of low undulating hills covered by dense jungle to high mountainous forests surrounded by grassland that reach their peak at Anaimudi or elephant head. At 2695 m above MSL, this is the highest point in India, south of the Himalayas.

We were welcomed by greenery as we began our ascent through 40 hair pin bends from Pollachi. We slowed down while crossing Aliyar dam to enjoy the view and stopped briefly en route to take pictures. Soon we found that every hill was covered with tea and silver oak trees. Waterfall was the first tea estate. Next came Iyerpadi where we took a detour into upper  Paralai estate at  Roti kadai. Nearly 5 km into the tea estate brought us to the end of the road after a small hair pin bend, to be welcomed by Sinnadorai Bungalow.

This was the Assistant Manager’s or Sinnadorai’s plantation home, built nearly 90 years ago. The now beautifully restored colonial  bungalow consists of the main building with two rooms (Tyler and Colonel Brock ) built in 1931. There are are two other cottages with two rooms each (Fraser and Marsh), perhaps the first European residence in the district dates back to 1929 ; Sullivan and Major Wells cottage was built in 1942. These cottages enjoy a spectacular view of the valley – we had a breathtaking view of the sunset on the first day, from just outside our room. All rooms have vintage furniture with modern attached bathrooms.

Simple yet homely and very tasty food goes hand in hand with comfortable well maintained rooms, manicured gardens and extremely hospitable staff at Sinnadorai. It is hard to pick any one dish as the best, but, the soups and the desserts were my favourite. Many dishes like the coconut souffle find mention in several blogs on Sinnadorai suggesting that the recipes have been perfected over time and handed down from one cook to the next.

It is people who make a place and this is true of Sinnadorai too. Most of the staff here have been around for decades and they treat the place as their own and guests as their family. Murugan, the friendly housekeeper readily accompanied us on walks around the Bungalow and is an encyclopaedia on the region, its people, the tea estates……… . Tavam, the security guard keeps watch at night, mainly for wild animals that tend to stray close to the buildings – his main weapon is his torchlight. He alerted us when a few wild bisons (gaurs) and lion-tailed macaques or monkeys came close by. Other members of the staff included Uma who was retiring after 32 years of service, Rani the cook and Jhansi her assistant.

Time slows down ( or does it stand still ? like the old clocks in the main bungalow). We had our fill of hiking/walking, eating, sleeping and playing badminton, carrom and scrabble, while at the bungalow.

After 3 nights it was time to pack up,but, the memories of plantation life in a colonial bungalow will remain forever